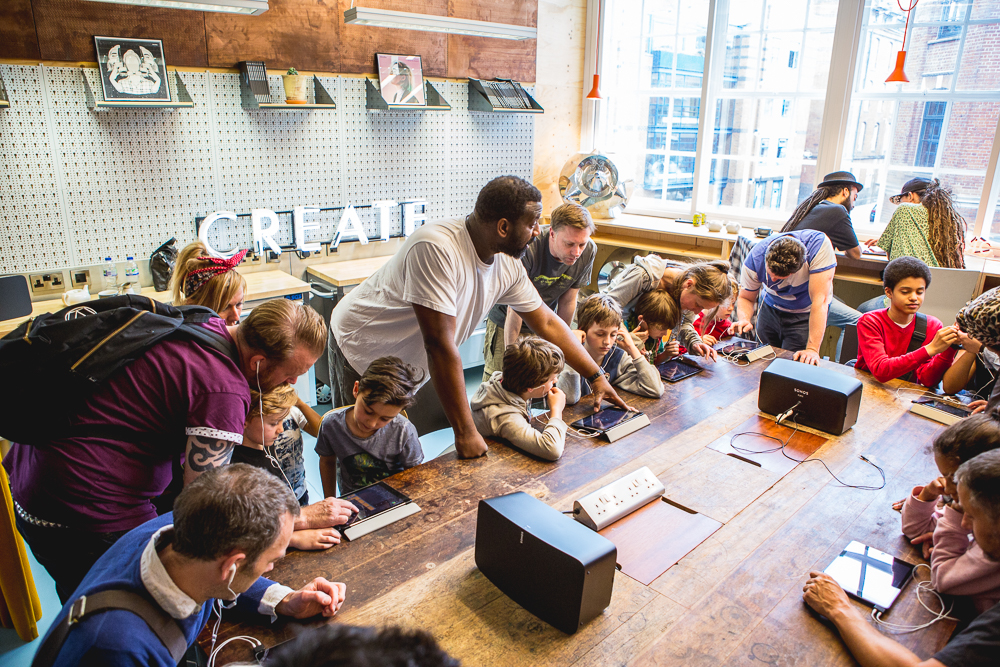 Sonos Studio celebrated Father’s Day in the UK the best way they know how: with an afternoon packed full of music. BBC Radio 1 and 1Xtra mainstay, MistaJam, joined them for a father-and-child beatmaking session plus an interview and listening session delving into his musical inspirations and how he shares music with his family.

Like Big Fish Little Fish, Sonos believe that sharing music across generations can be one of the most important things in life: not just a way of having fun together – though that in itself is vital – but a way of bonding, sharing ideas, feeling a part of something bigger. Whether out in a field enjoying a DJ at a festival, dancing together at a Big Fish Little Fish event, or sitting at home discovering sounds together or sharing old favourites, listening to and understanding music together is one of the great joys of family time.

We chatted to MistaJam during the afternoon to find out more about his musical upbringing and how he passes music on to his children.

What are some of your earliest musical memories?

One of the earliest musical memories that I can actually think of is being at the kitchen table in the family home with a Fisher-Price record player—but it wasn’t one of the ones that played plastic records, it was one of the one that actually played real records. I was completely obsessed, so much so that all of my family members—all the older cousins and aunts and uncles—would just give me vinyl records that they had finished with, and that’s where my collection started. I’ve still got records from back in those days. There’s a photo my mum’s got of me, aged 2 or 3, with this record player, playing some Stevie Wonder record.

When did you first begin to take those influences and that obsession and experiment with making or curating music?

So I found this course at a local youth club, because I wanted to learn how to DJ properly. The idea of it was that if you did a drugs awareness course, you could then get access to their community studio for free, and when you went to the studio there were specific tutors there to give you a specific qualification, DJ skills and also studio production. That’s where I was looking at mixing desks and looking at Cubase and old Atari rackmount samplers and learning how to actually make beats.

At that point it was sample-based stuff, so we were all tasked to bring in a sample for the next session. So I’m looking through my dad’s record collection, I’m looking through my record collection, and it was the fact that I was able to take in rock records, R&B records, soul records and put them all together that really taught me how you break down hip-hop production. That was when I was about 14, when it all kind of clicked for me.

Do you think there’s something about the art of beatmaking that makes it particularly accessible to all—as opposed to, say, a guitar or a violin?

I think so, yeah. If you look at the way technology has developed over the years, it’s become supremely hands-on, so you get that feel of actually playing something—but you don’t necessarily have to learn scales or do all of the theory. You can make a beat using the technology that sounds quite good. It’s quite hard to pick up a guitar without having played it before and make a sound that’s good. It’s easy for you to be able to pick up a drum machine or iMASCHINE or whatever it may be and make something that sounds relatively passable without any skill or knowledge beforehand. 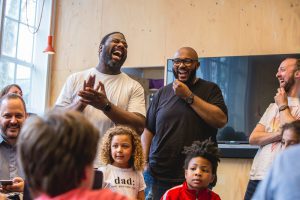 When you’re passing on music to your children, is there anything that reminds you of how music was being passed down to you? How has it changed over the generations?

My dad was born in Ireland, grew up in England, married a mixed race woman from England and Jamaica—so we would hear every kind of music in the house. There’d be everything from UB40 to random old prog rock records that his brother was playing. It was always there.

I always try and keep music on in the house—whether it be the radio or a playlist I’ve put together, I always try and make sure that there’s something on that the kids are gonna remember. Being that person that I am that wants to introduce people to music, I’ve been recently trying to make sure that the stuff that’s on in the house isn’t necessarily the stuff that they’re going to hear anywhere else. 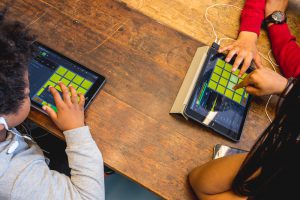 Are you surprised by what they’re into? Or is it the same sort of stuff that kids their age are into generally?

The thing that surprises me about my kids is how much they take in. I’ve always been a beats and melody guy. If you ask me the lyrics to some of my favourite records, I couldn’t tell you—but I could tell you the melody or the bar structure. But my kids, I play them a record and then afterwards they’re quoting lyrics to you, which is really interesting. Again, they just absorb it. You’ll play them something once and if they like it, they’ll ask you to play it again. I love that.

I can listen to a record and it takes me back to the first time I heard it—to the thing that I was wearing, the thing that I was eating, the place where I was—and I think that if you are making music with your children and you’re using samples and introducing them to stuff via that way, they’ll always have that memory. I remember Phil Collins Another Day In Paradise—I remember my dad absolutely hating that record, but I liked it. So I wanted to annoy him, I’d play that record. I want my kids to have that kind of memory.

The first time I took my daughter into my home studio, she was a few months old, so we just had her sat there and she was just banging on the keyboard and I recorded it. Every now and then I record it and play it to her and she’ll just say—”that’s noise daddy, turn it off!” No, that’s YOU!

How do you achieve a healthy work-life balance?

My family have sort of got used to the fact that as soon as summer starts, daddy disappears because of festival commitments, international residencies and so on. Obviously on top of all of that, I’ve got five days at radio. So it’s about making most of the time you’ve got—making sure that the kids came down to the session today and that we do spend some time together on Father’s Day. Tomorrow, knowing that it’s full-on family day, turning the phone off and not doing anything else at all. It’s really just any time that we have got, making sure that I’m there.

It’s quite easy—especially with the way things work at the moment and everything being so digital and everyone being so accessible—that you can be working 24/7, 365. But if you’re at home, be at home. 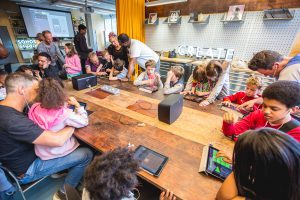