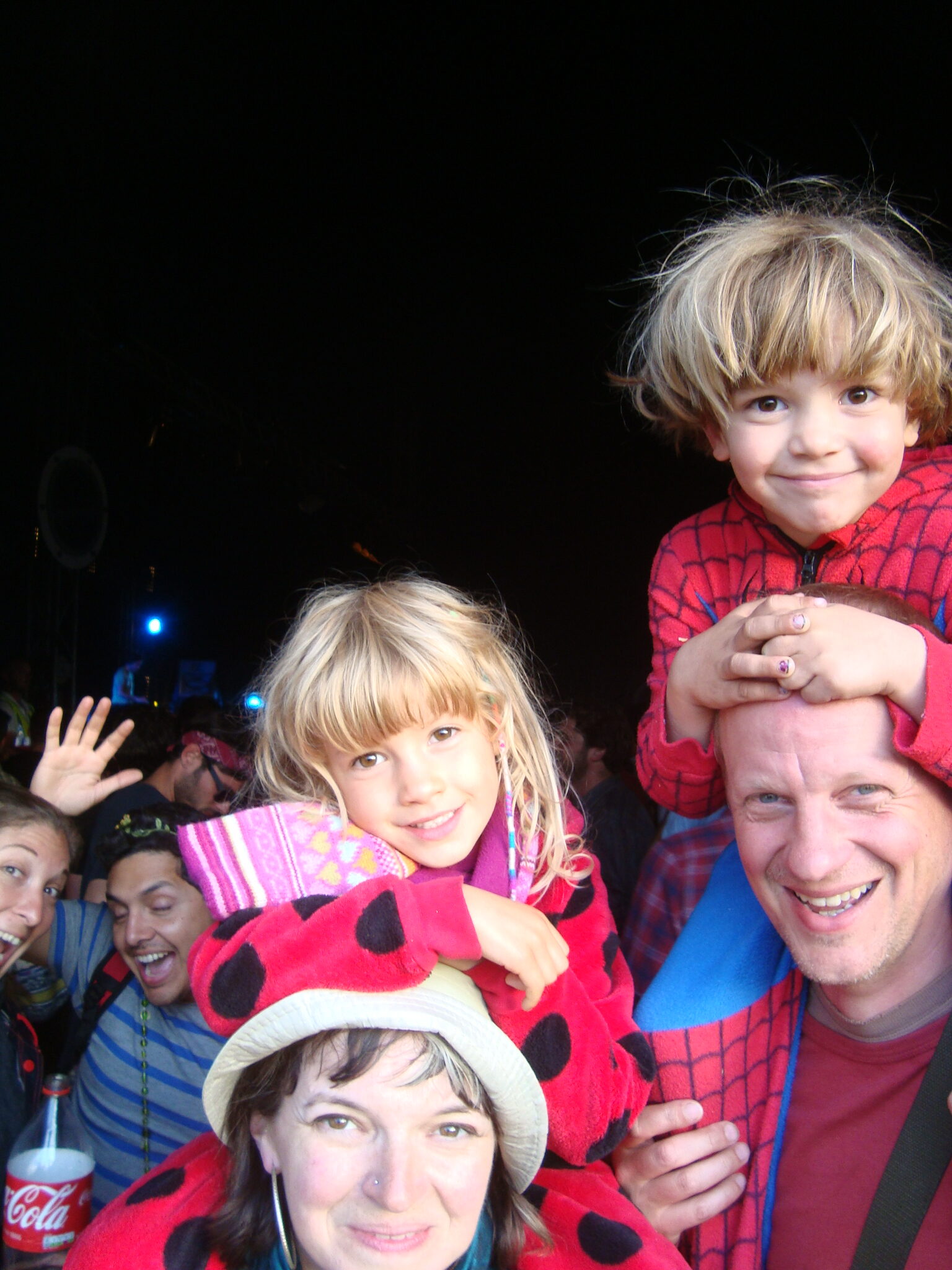 Today we announce our full festival programme as I get ready to leave for Glastonbury Festival (where BFLF are performing on the Greenpeace stage). I (Hannah) have been attending Glastonbury since the mid-90s and I have always enjoyed it as a holiday from life stresses, where normal rules don’t apply and everything is such daft fun. In 2009 I attended pregnant, and decided there and then that next year I would bring my baby. I had terrible morning sickness and felt dizzy all the time, so as my mates whirled around I would go and speak to people with prams (which seemed to suddenly appear – previously I had never noticed so many people brought kids!) – and asked how they managed it all.

I often say how our daughter’s first Glastonbury she was 4 months old but she had already been to 2 festivals when we took her!

So 2010 we finally made it to Glastonbury with our four month old! The first night was hell as she wouldn’t sleep and and was crying so much we took her to the medical centre. That was a first. There was nothing wrong and from then everything was absolute magical. So much so, it was the inspiration to create Big Fish Little Fish – the original family rave!

That middle photo was taken gone midnight, just after we had watched Orbital play (and introduce the new Doctor Who Matt Smith to the stage – more on this later) and her face was the most incredible mix of awe and love. She didn’t stop laughing the whole time we were there.

In 2011 I was very heavily pregnant with our second child so we didn’t go – though we did manage to get Atti out to a festival – Applecart – when he was about 10 days old.

In 2012 we made it to Latitude – where Winter showed her festival experience and Atti started getting into the swing of things.

Finally our family of four make its Glastonbury debut in 2014. Winter is 4 and Atti still 2. ONE OF THE GREAT ONES. Kids still light enough to push about in trailer and hold on shoulders. Start to get struck into doing crafts and dancing everywhere. Up Ribbon Tower for first time together. Everyone enjoys going feral. Kids can sleep with mayhem all around.

…and so on to Glastonbury 2015. Kids were larger so we needed a bigger trolley and it got muddy. Also David not a happy festival bunny that year. Atti did make his posing at the Stone Circle debut however and many larks were had.

Glastonbury 2016 AKA The One That Nearly Killed David. It was muddy from the start (Atti faceplanted full length as we walked in the gates) and where Big Fish Little Fish had our Glastonbury debut – at the Stonebridge Bar in the Park. We also found the Stone Dragon for the first time and I met Steve Davis (interesting).

In 2017 we were lucky enough to be asked to play Stonebridge again. Kids are now working on their moody Stone Circle poses. We see the opening fireworks for the first time up close. The whole family goes Full Festival early doors. I ask Matt Smith and Lily James to babysit the kids for a few mins – without realising who they are. Winter does gymnastics backstage and the kids now push their own old buggies in the evening so they have somewhere to fall asleep.

So on to our last time at the Pilton Festival of Cider and Dancing in 2019. This time we played Greenpeace – and had a raucous reception with thousands of revellers! One of my mates had a Festival radio and someone said ‘I don’t know what’s happening at Greenpeace but it’s going off!’ and he thought ‘That’ll be Hannah’. We’re STILL posing on the Stones. Now the kids have graduated to masonry in the Green Fields (probably want to make their own Stone Circle for posing purposes at home) and carry their own chairs out for the evening over their shoulders. 2019 Winter finally managed to use the Long Drop loos without any cajoling. When she came out we high fived (probably not really a good idea in retrospect – but I was a very proud Mummy)!

So – come join us in 2022? We’re at Greenpeace again and I’m sure you’ll find us posing at the Stones one afternoon. Each year I see the way the kids play at Glastonbury change and am delighted once again and my love for the farm is renewed. There really isn’t anywhere else like it. See you in the fields. Hannah xxxxx